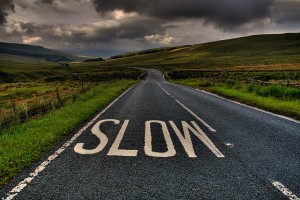 Before every meal that Amy and I sit down to, we lean into each other to express our gratitude and appreciation for each other… and to offer a kiss.  This is a prayerful moment for me as I express these parts of my love for her… to her.  While being able to enter into that space with her is wonderful enough… there are also moments leading up to that which are just as special.

There is often a tug of war over who gets to put food on their plate first.  Often times we will pile the food on our plate at the stove and then move to the table.  I always insist that she get hers first… and she returns the insisting that I go first… I tend to give in most of the time.

She likes it that way.

From the stove, I will move my plate to the dinner table where I will put it down, and anxiously wait for Amy to arrive with hers.  I don’t sit down yet… because my heart is longing for her arrival (even though it is usually just a few feet of distance between us).  Sometimes, I need to remind the kiddos (who are already seated) not to take a bite until she arrives.  She is worth the wait.

Finally… Amy will arrive with her food, and I will time out my sitting down with her… so that I can lean in for that kiss… and the expression of gratitude and appreciation.

This is only one example of one of the greatest lessons I have learned in my life from Amy… the importance of a woman being able to set the pace.

As a man… with many ideas… I have had the double edged sword experience of having the ability to jet off in many directions… satisfying the ideas and ambitions within me.  But have burned out trying… or been too afraid to actually move any of those ideas into reality.

I had no sense of pace.

A woman has a natural way about her that feels her way into waiting.  As a man… I can suggest any number of directions that we could head… all of them may be good… but not all of them may be the way that we should go.  And so I need her…

I need her to set the pace… so that the good ideas drop off… and the great ideas remain.

I need her to set the pace… so that as a man, I can appreciate more that natural intuition she has to feel her way through life with me.

I need her to set the pace… because sometimes, as a man… I miss the urgency of a situation where action is needed… now.

I need her to set the pace… because in my ability to move from point A… to B… to C… sometimes I miss the opportunities to pause at point A.1… A.2…. A.3…

Men tend to miss out on a lot of life… because we haven’t learned to slow our pace down long enough to smell the roses.  We get pace wrong… a lot.

To teach me how to to trust… and to find God in the places that move slower in life… to breath in all of the graces I would have missed… had I set off on my own… and expected her to keep up.

God then asks a simple question of them: Who told you that you were naked.

There is no verbal response or answer given. I imagine, that the only thing that took place was that awkward and blank stare that parents receive from their children upon asking them who left all the lights on in the house.

Their was no answer needed, because in Adam’s heart, he was already experiencing the answer to the question. You see… it was Adam who told Adam that he was naked.

The shame that Adam was experiencing for partaking in more than what was needed created a gap in how Adam saw himself.

Shame had caused a separation to be experienced within his being… one that caused him to hide behind the covering of clothing and the foliage of the garden. This was the first time that Adam and Eve felt that they were not enough, and something more was needed than what they had already been given.

The situation spirals as Adams response to having to confront his own shame leads to deflection and justification of his actions as he basically says that it was God who had decided that all he had was not good until ‘she’ came along. It was God’s fault for disrupting Adams bachelor life in the garden with all the plants and animals. It was God’s who had decided to create Eve…

And it was in that moment, with finger pointed to Eve, that I can see Adam turning his head towards her and catching her eye for the first time since letting his shame take control of his tongue, that he saw that she too now felt his shame against her…

Before these few critical moments in the human story, all that was understood was a deep, close intimacy with nothing between man and woman. This reality which none of us have experienced in this life, gave way to a new ‘knowing’… if you will… as they now understood something that we know all to well… separation.

It is being in the same bed with someone, and feeling as if you are universes apart.

It is words articulated clearly that fall on deaf ears.

It is giving the best of what you have, only to discover that it doesn’t seem to be what they need.

Separation… birthed from our response to the shame of not being content with who we are and what we have that is what we must deal with every day as we seek to get back to a lost innocence, and a life that we know could be much simpler than all that we have created it to be.